Fact: The first Canadian food bank was established in 1981. While they began as an emergency measure, food banks have become mainstream.

Fact: Hunger is a serious issue in Nelson. In the first nine months of 2018, 1,500 different people have accessed our food bank; many of them on a weekly or monthly basis. Food bank usage at the Nelson Community Food Centre is 85% higher than before the recession of 2008.

Fact: Approximately 20% of people who are supported by the food bank are children. 35% receive income assistance and have a disability that prevents them from working. 3% work full-time for low wages.

Myth: Mostly newcomers and transient people use the food bank.

Fact: Our recent survey reveals that 99% of people live in the Nelson area. 61% have lived here for more than a decade.

Fact: 97% of respondents to our 2014 customer survey said eating fresh produce regularly is important to them, as has subsequent surveys. Fresh produce and quality protein-rich foods are the most requested items at our food bank. 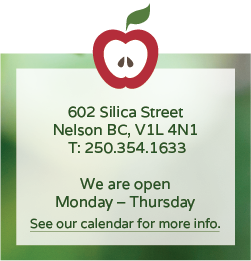